Created by Freddy Dumont in 1941, specifically to go with sirloin steak, and served in the Restaurant Café de Paris in Geneva, this herb/spice butter was an instant success. So much so that it was almost impossible to get into the restaurant for years. The exact recipe is probably still secret today, and only a few restaurants world-wide are reputed to serve the original recipe, amongst them the Parisian ‘Le Relais de l’Entrecôte’ and the ‘L’Entrecôte de Paris’ and the ‘Café de Paris’ in San Francisco. The original Restaurant Café de Paris in Geneva still exists (albeit under new management) and still has the butter on the menu.

You won’t find a recipe for Café de Paris in Escoffier, Larousse or the Sauce Bible. Nor is it listed in the Oxford Companion to Food, Food Essentials A-Z or in the Cook’s Encyclopaedia. I did eventually find it in the German edition of ‘Der Grosse Pellaprat’, printed in Switzerland in 1966. Interestingly, it closely matches the recipe I have from my father, from his time as a chef at the Savoy in London in 1943.

Surfing the internet it becomes obvious that there are a lot of ‘chef’s versions’ out there, some quite close to what you would expect and some really way-out, like a German hotel chef’s version mounting a herb butter based on thyme, tarragon and parsley with sweetened condensed milk!

In Sydney Café de Paris butter is on the menu at quite a few restaurants and one, Bistro Moncur, is certainly very well known for this dish and their version is superb.

You will find Café de Paris butter on the menu at the following places in Sydney at the moment:

Method:
Mix all ingredients with the exception of butter in a glass bowl and leave
to marinate for 24 hours in a warm part of the kitchen (a slight
fermentation occurs). Purée the mixture in a blender and push through a
chinois. Foam the butter and mix with the purée. Cover and store in the
fridge. It is customary to form the butter into a log, freeze it and cut off slices as you need them.
Keeps for several weeks.

Upon service a round of frozen butter is placed on the cooked sirloin and put under a VERY hot salamander for just long enough to begin to brown the top of the butter (while the butter underneath stays cold). 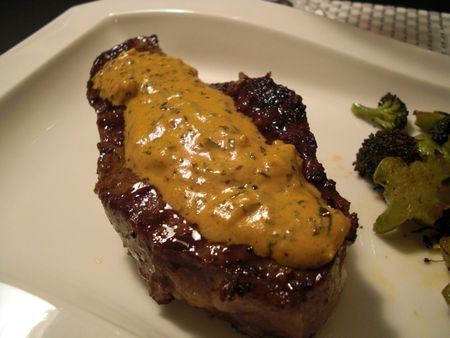